There’s been a great BBC television series here in the U.K. over the past month or so called ‘Money For Nothing.’ It always starts with the presenter, Sarah Moore, at a public waste disposal plant. She keeps an eye on what people are throwing out and when something of interest catches her attention, she goes into action. It might be a well worn wax jacket or a sad looking wardrobe that has been left to rot in the corner of a shed for the past 30 years. I think my favourite, so far, has been the half sawn leatherette sofa!

Prior to the object being thrown into the skip/dumpster, she makes her move onto the unsuspecting owner and asks permission to take away their junk to be upcycled. It’s worth watching just to see some of the expressions on these bemused faces. You can almost hear their thoughts of “What on earth will she do……?” “Is she mad……?”

The broken down items are taken away and supported with an army of experts from metal bashers to carpenters to bagmakers and welders, she always upcycles the ‘junk’ successfully. There’s always a profit to be made too, which is handed back to the original owner. A nice touch.

A Labour Of Love

Which brings me to my wife, Debbie and the interest that the series has sparked in her. Our neighbour was getting rid of an old cupboard. You can see what it was like in the photographs. We needed storage in our bedroom and this was the ideal item. After removing the four castor wheels and the doors, she set about sanding the whole thing down. I think many people would have given up at this stage, but she was on fire with enthusiasm and had a clear thought of what she wanted to achieve. 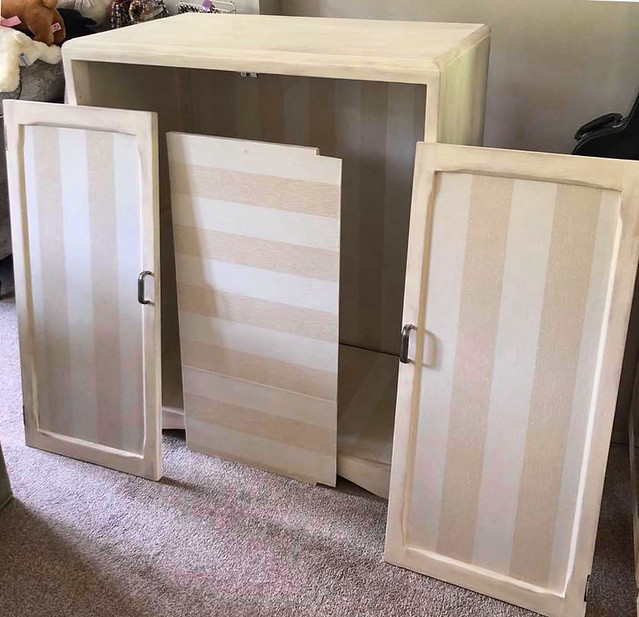 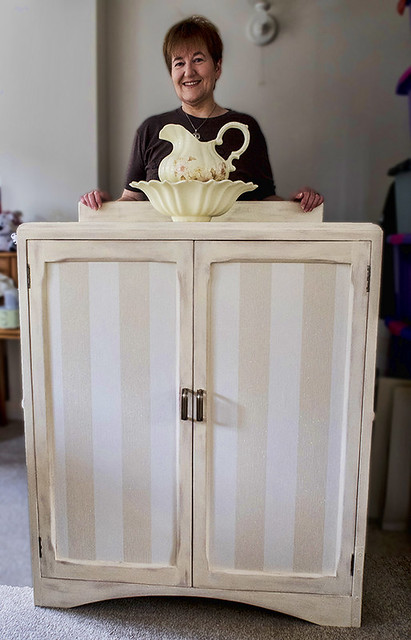 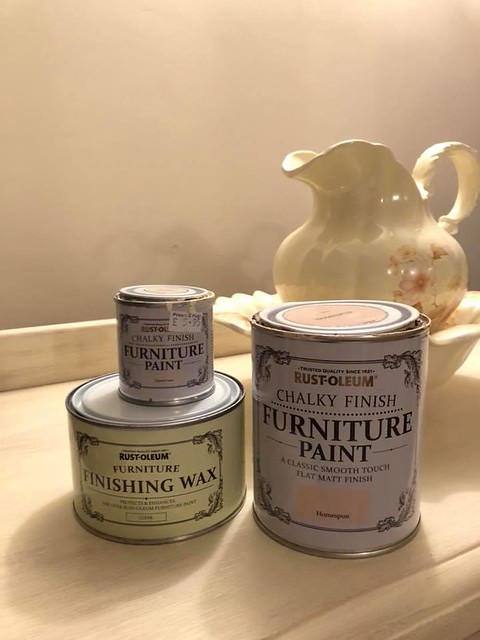 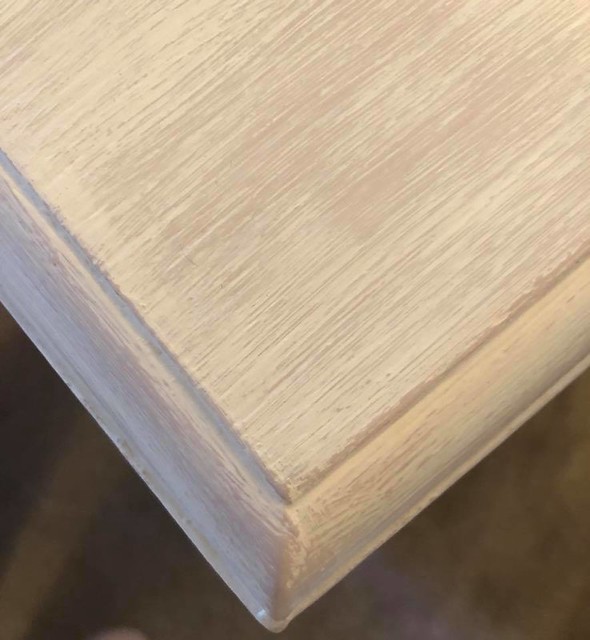 The next step was to wipe it down and vacuum any remaining dust. The first coat of paint was added, Rust-Oleum in Homespun, chalk paint. Then another two coats were painted on top. Add to this a coat of the same paint in Clotted Cream. Next process was to add a distressed look to the finish. This was achieved by rubbing areas of the top coat of paint away using a damp cloth. The paintwork was then sealed using Rust-Oleum finishing wax which was polished to reveal a nice sheen.

The door panels, shelves and back were covered using Graham and Brown Super Fresco Beige Striped wallpaper. She wasn’t sure what adhesive to use and tweeted Sarah Moore who kindly replied that she uses diluted PVA glue. This was also used to coat the paper twice as a sealant. The door handles were given a polish and after a little help from myself, refitting the doors, the upcycling job was complete! It’s funny Debbie thinks it’s a chip off the old block as her father was a painter and decorator.

For followers of Twitter, Sarah Moore she can be found here

I'd love to hear from you Cancel reply

Lockdown for the next 17 days. #covid_19 #facemask

Horses in the Autumn rain.

Lots of horses and they couldn’t drag me away. #

It’s cool, but a beautiful day. Life is good.

We had to light the fire today, it has gone so col